At the end of a long, exhausting battle campaign, Alexander the Great turned around. His army conquered much of the modern world by 323 B.C. In the heart of India, his generals advised that he stop and return troops and hardware to Babylon in order to consolidate his new and yet vast Greco-Macedonian empire. Alexander dealt with uncertainty with aplomb; in the heat of war, he masterfully defeated his enemies with innovative battlefield tactics. But to prepare his empire for a multi-century reign, he strategically moved the campaign back to a Middle Eastern city.

Today, the oil and gas ecosystem in North America has undergone a similar change after conquering shale territories over the last twelve years. The economic shock of COVID-19 led to a nadir of energy prices in April 2020. North American asset impairments exceeded US$100 billion in the first half of 2020, according to Evaluate Energy. Then, in the second half of 2020, corporations consolidated US$50B of shale assets, according to Enverus. In 2021, oilfield service providers, the siege engines of the supernational exploration and production companies (E&Ps), must be ready to serve this fused segment at a moment’s notice.

Move Forward with a Plan

The North American oil & gas sector is accustomed to uncertainty. Companies that operate in this ecosystem must parse policy initiatives and manage upstream price volatility. The middle market oilfield service providers (OFS) navigate treacherous economic landscapes along with their fossil fuel extracting brethren. These operators are mindful of capital expenditure (CAPEX) cuts at the majors, making their own CAPEX decisions to align with those of their customers.  When the energy cycle responds to tighter markets, executives tend to deploy assets to fields and basins with the greatest chance to experience activity. They will consider the effects of competitor proximity on capacity and service pricing of equipment. 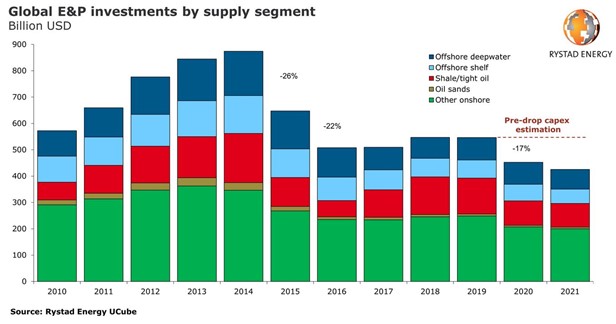 Despite higher prices in light sweet crude, as evidenced through a strengthening curve in NYMEX futures contracts, independent E&P companies are expected to cut spending by 6% in 2021, according to Cowen & Co. This follows reductions of 48% in 2020 and 12% in 2019. Owner operators must have a plan to move idle equipment or mothballed rigs in case tightness in the markets continues.

Few industries endure the brutal sensitivity to commodity prices like that of the oil and gas. Forty-six E&P companies filed Chapter 11 bankruptcy in 2020, with fourteen of those being multi-billion dollars in value, according to research by Haynesboone.  Although this is on trend with annual filings over the last six years, sizable production and CAPEX cutbacks have taken slack out of the marketplace. Lowest cost producers have not been spared from a rapid decline in storage capacity and the resulting negative prices at the wellhead in Q12020. 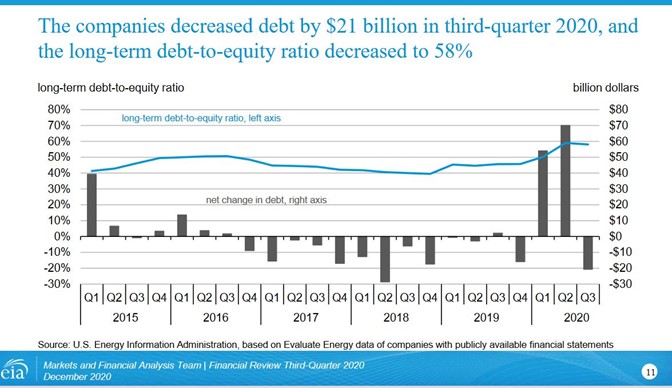 Mergers between supernationals could be consummated because of debt-heavy capital structures and permanently reduced demand because of COVID-19. The decline in market capitalization of these majors exemplify the value destruction since 2014, accelerated in the back half of 2019 and first half of 2020. OFS executives reexamine their cost structures during these times, pursuing balance sheet restructurings, dealing with borrowing base redeterminations and eying basin redeployments. These service providers and independent E&Ps must prepare for faster redeployment even with the supermajors still staggering from a year of heavy operating losses and asset write-downs. Smaller contractors must be nimble to properly serve the sector. 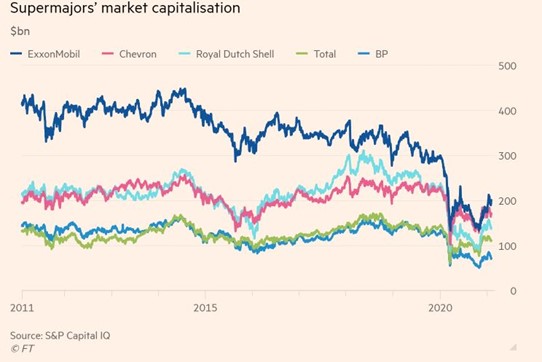 A change of strategy for the next cycle may be warranted. There have been eleven straight weeks of rig count increases in the North American oil and gas market, according to Baker Hughes. Field service operators have experience reviewing and forecasting this industry metric and others like it as a barometer of economic activity in the sector. They will review which basins represent metrics and field characteristics that are favorable for their equipment to match E&P asset investment.  They should be aware of which basins will remain active when oil is below certain thresholds. For example, in basins where E&Ps experience high operating costs and or lower price realizations, newer technologies can drive wellhead costs down. Armed with knowledge about a customer’s recycle ratio or debt adjusted cash flow will provide insight for OFS operators, yielding an edge over a competitor. Still, there may be no substitute for companies that understand the macro risks of deploying assets to federal lands with policy overhang. The prudent still mobilize assets closest to customers geographically, regardless of basin type.

Companies with leaner structures can rejigger corporate strategy to a changed landscape. Even under public policy uncertainty, smaller OFS companies should focus on logistics. Going on the offensive, under certain circumstances, OFS mimic battlefield movements using forward supply bases can capture business quickly. Developing a logistical plan has never been more important than coming out of a depressed, supply and demand driven oil and gas market. Simple planning around well head activity and transportation infrastructure must be swiftly executed. The timing of activity is tactical but the systematic way of deploying resources quickly to serve customers that are strategically positioned in favorable basins is a viable strategy. Not having a proper plan with stakeholders who can support the change in strategy is a planning mistake that could befall operators who fail to recognize the urgency of this inflection point.

Today, E&P and OFS operators alike must navigate uncertainty around public policy and variable outcomes of green initiatives that threaten the bloodlines of fossil fuel extractors. With a strengthening forward curve and global production cuts at their backs, oilfield service contractors should consider how to optimize their operations so that swift deployment will not leave money on the table in 2021 and beyond. They will need to square up with financial backers so that they can mobilize to basins they deem most favorable for utilization. Not doing so risks leaving the equipment idle or mothballed and not on the front lines.

Brett Ladendorf is a Managing Director at Abraxas Group, a boutique advisory firm focused on providing transformational leadership to middle market companies in transition.  He can be contacted at: brett@abraxasgp.com.